Popular Motorcycle makes in the USA 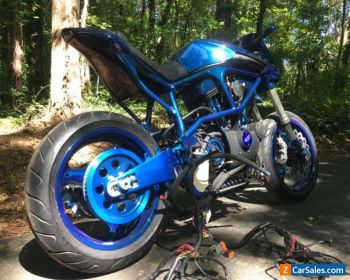 See photos, price, reviews and more details for 1999 Buell Lightning on this page. 1999 Buell Lightning for sale on profitable price. In order to better appreciate the vehicle you may see quality photos, seller description, technical specification and users reviews. If you want to buy 1999 Buell Lightning will contact you with the seller where you can discuss this vehicle in more detail, as well as information on discount, shipping detail or how to get a loan.

I really want to finish putting this back together so I can ride it myself again (it was rideable before It was disassembled to be painted) but I just have too many projects going on plus work at the same time so I figured I would list it as-is until November 1st and after that if its not sold ill make some time to finish putting it back together so I can ride it before I re-list it again. The custom tail section was unpainted white fiberglass with the seat, SS tail frame and led tail light made by Speed-Of-Color in Germany. The rear shock was made at Twin Motorcycles from the Netherlands. 1200cc V-Twin (Harley Engine) Buell Lightning Carbon Fiber Extreme Limited Edition #63/100. It says Japan Special Edition but I went to the Harley dealer and they said it was purchased in the USA as a Carbon Fiber Edition. There is info on the internet where people are curious to the story about this bike on badweatherbikers.com. Real carbon fiber with cosmic candy blue, freshly painted frame, engine, carbon, cosmic candy blue. Sold as is and not fully reassembled. Jim Jones the owner of TRA-CO Racing Engines who makes custom motorcycles called Ecosse where each motorcycle is custom like “The Ecosse Night Stalker” worked on the engine because there was a valve cover leak so I had some gaskets and fasteners replaced while they painted some engine parts. Some of the factory fasteners were changed to SS ARP fasteners on the engine. Street fighter custom tail. Black and blue hydro dipped flames on the tail section. I just had all of the paint work done at Auto Concepts Of The Carolinas. Very nice, and shiny in person. I don’t work at Auto Concepts Of The Carolinas i’m just a happy customer but if you would like anything painted call and talk to Jesse. I actually found them when I needed some carbon fiber repair done on this 1999 Buell Carbon Fiber Extreme. The factory blue clearcoat that was over the carbon fiber tank, chin fairing, and front fender had faded and flaked off so it had that greenish yellow color. Auto Concepts Of The Carolinas repaired a spot on the front fender and chin fairing that had cracked. they hydro dipped the tail section, had some of the parts tumbled, and painted almost everything. This Buell has a new Harley Davidson belt, NOS Fuel pump, new SuperTrapp exhaust with seven discs I think that came with it for airflow/sound adjustment. There was Buell decals on the tank so after removing them and painting over the tank it gave it a nice two-tone look where you can still see the Buell lettering because it’s a slightly darker blue. LED Tail light with mini LED turn signals not pictured. The tail section, belt guard, rear shock, pulley cover , and some other parts were made in Europe but then I had them painted in the USA. The headlights, headlight brackets, headlight guard, carbon fiber windscreen were NOS parts painted and modified to fit. I drilled and tapped the bolt holes in the triple tree for the XB9SX mounting bracket. The Aluminum gauge mounting bracket is from a Buell M3 and the top has been machined by Auto Concepts to fit under the XB windscreen. I have a special bracket made for the license plate to fit underneath the tail section that holds the mini LED turn signals and LED license plate lights also that has been painted blue but it’s not in the picture and there are several things that are not in the pictures. The ECU is the for race only version, K&N air filter, Rizoma handlebars/grips, chrome spikes that are covering up the 4 bolt heads that have light rust from age. I have 4 quarts of Harley oil that is included with it also. Aftermarket carbon fiber tank fillers, breather, rear mini brake reservoir, new Galfer front rotor and Galfer stainless steel braided front brake line. Transparent blue timing cover with Buell pegasus. The headlight and windscreen assembly is the same that is on a XB12SX also. New SS bearings in one of the wheels but I forget if it was the front or the rear off the top of my head but when I remember I’ll revise the notes. Aluminum PC Racing FLO filter with reusable stainless steel mesh filter. Oh yea and the handlebar clamp Jesse machined down 10° so that it would fit under the windscreen better. Speed Of Color and Twin Motorcycle parts from overseas.

TOP «Buell» motorcycles for sale in the United States