Popular Car makes in the Australia 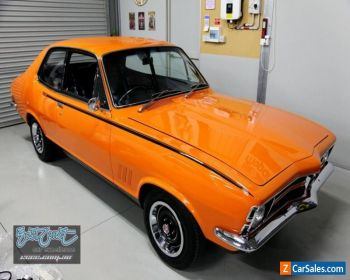 **SOLD**
THIS LC GTR HAS SOLD, BUT WE HAVE A BUYER WHO JUST MISSED OUT,SO ANOTHER IS NEEDED. PLEASE CONTACT ME IF YOU HAVE A GREAT EXAMPLE THAT YOU WOULD CONSIDER SELLING.
DURING MELBOURNE LOCKDOWN, A GLOBAL PANDEMIC AND RECESSION WE MANAGED TO SELL THIS GTR IN JUST 20 DAYS... IF YOU, YOUR FAMILY OR FRIENDS HAVE A CLASSIC OR MUSCLE CAR (MODERN OR OLD SCHOOL) THAT YOU HAVE CONSIDERED SELLING IN A TROUBLE FREE, EASY TRANSACTION, FOR A GREAT PRICE, PLEASE CONTACT US AT....      ECCE.COM.AU

The LC GTR on display here is a very early build, being February 1970. It is a Melbourne built car and is a Genuine tagged GTR Torana owned by just 2 owners over the last 3 decades. It has been a rarely driven, weekender for all of this time and the great original, rust free body and original parts demonstrate this.


The car was built with Daytona Bronze paint and Antique Gold Trim. A very cool combo itself in current times, however in the 80’s or 90’s, a previous owner chose to go the far more flamboyant colour scheme of Lone O’Ranger with Black trim. This colour scheme looked so good that although the following owners wanted an unmodified LC GTR, they decided to stick with the wild Orange and Black combination. Apart from the colour and some neat, hidden retractable front seat belts this car has been kept to the original LC GTR, Holden specs.


It still runs the original 1970 model, 2600S engine, which was completely rebuilt around 8000km’s ago in 2009, to the factory specs. The original Opel 4 speed is still in place and changes smooth throughout all gear selections. The car runs a factory spec exhaust with the very cool twin dumper tail pipes as used on the GTR.


Mechanically everything has been serviced or rebuilt as close to factory specs as possible and the car drives as it would have in 1969, requiring no current maintenance. The engine bay itself is as period correct as currently possible.


Although the car was already Orange and in excellent condition 20 years ago when the current owner bought it, being the fussy man that he is, it was decided to go back to bare metal and a complete body, rotisserie restoration was performed in 2009 whilst the engine was out for the freshen up. Just 2 small rust holes were found beneath the paint at this time and 90 percent of all the bolt ons including complete interior were fitted back up to the car with just a few new parts like badges added to perfect this GTR.


The boot still has the original spare wheel and boot mat although it has new paint throughout. The undercarriage presents like the rest of the car in clean, original condition. The Glass, stainless, grill, lights, body, paint, etc are also in excellent condition.


The Torana rolls on immaculate GTR wheels with as new tyres.
It is located in Narre Warren, Victoria


FOR FURTHER DETAILS AND MANY MORE HIGH RESOLUTION PICS VISIT